A family in Buderim, Australia, had to deal with four large carpet pythons that had invaded their home’s backyard deck. 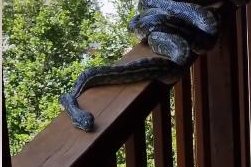 The four snakes appeared on the deck over a two- to three-day period. Six snakes in total have showed up at the house over a two-week period.

The family called reptile specialist Sunshine Coast Snake Catchers 24/7 to handle the issue and take the snakes off of their property.

The company uploaded a video to Facebook of their catcher Stuart McKenzie grabbing two of the carpet pythons before releasing them back into the wild.

McKenzie had to stop by the house multiple times to catch the snakes with the last one being one of the thickest he has ever seen.

“It’s not very often this happens but during the breeding season we regularly get called out for multiple snakes at one home,” Sunshine Coast Snake Catchers 24/7 said.

Camp Lejeune’s toxic water victims get chance to fight back

Watch: Kenan Thompson says he would like to make ‘Good Burger’ sequel

Camp Lejeune’s toxic water victims get chance to fight back

Watch: Kenan Thompson says he would like to make ‘Good Burger’ sequel