A California man put his love of spicy food to the limit when he broke a Guinness World Record by downing three Carolina Reaper chili peppers in 8.72 seconds. 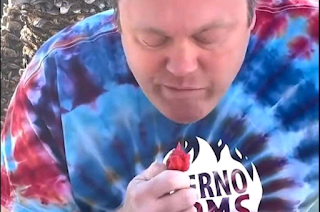 Gregory Foster took on the record for fastest time to eat three Carolina Reaper chilies at the Seaport Shopping Center in Downtown San Diego and ended up eating six of the super-hot peppers when his first attempt was disqualified.

“In practicing for an attempt like this it is more about mechanics and muscle memory, so I time myself eating small sweet peppers to get the chewing and swallowing down to automatic responses,” Foster told Guinness World Records.