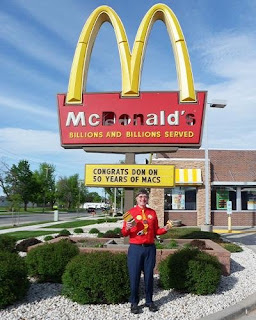 A Wisconsin man who earned a Guinness World Record for most Big Macs eaten in a lifetime celebrated another milestone: 50 years of eating a Big Mac nearly every day.

Don Gorske of Fond du Lac earned a Guinness World Record in 1999 when he was confirmed to have eaten 15,490 of the McDonald’s sandwiches in his lifetime, and the record was most recently updated in August 2021, when his total surpassed 32,340.

Gorske is now celebrating 50 years of eating a Big Mac almost every day since May 17, 1972. The burger fan, who said he most often eats two of the sandwiches on a given day, said he has missed only eight days in his 50-year fandom.

Gorske said he has tried other burgers, but nothing stuck with him like the Big Mac.

“I had one Burger King Whopper in 1984 and one Topper double burger in 1984. There are a lot of other burger chains that I have never had the desire to try,” he told Guinness World Records. “I’ll probably be eating Big Macs every day for the rest of my life.”