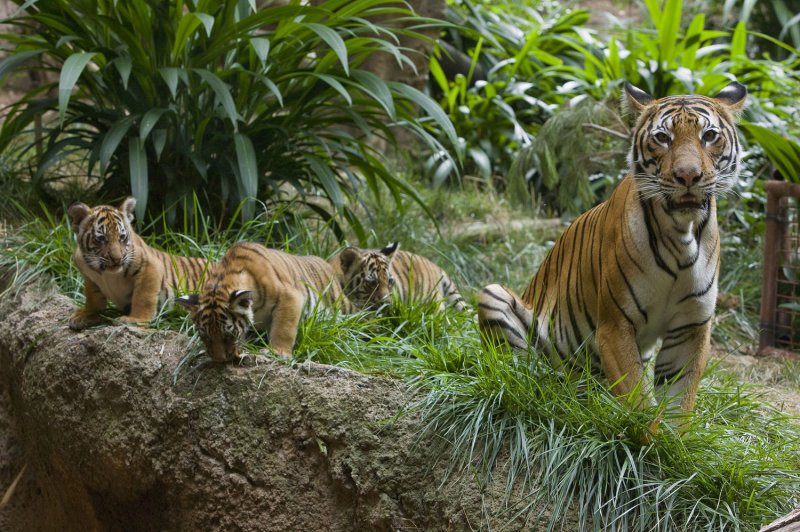 A trio of Malayan tigers were born at the Little Rock Zoo in Arkansas (this is a stock photo and does not depict the tigers in question). File Photo by Ken Bohn/UPI | License Photo

Aug. 15 (UPI) — A trio of endangered Malayan tigers was recently born at the Little Rock Zoo in Little Rock, Ark.

The three tiger cubs were born this past Saturday to mother Asmara, according to a social media post from Little Rock Zoo officials.

The zoo said that Asmara gave birth in a specially prepared indoor denning area, where she and her cubs will remain inside for a few months to get used to their surroundings.

The zoo said that both the mother and the cubs are doing well. The sexes of the babies have not yet been announced.

The cubs’ father, Jaya, is currently on display in the tiger habitat and can be seen by guests.

The three cubs will likely come as welcome news to the Little Rock Zoo, which said that the births were recommended as a part of the Malayan Tiger Species Survival Plan.

“The birth of these cubs is significant toward the conservation of this beautiful animal,” the zoo said.

While all tiger species remain threatened, the Malayan tiger — native, as its name suggests, to the country of Malaysia — faces significant threats from poaching, illegal wildlife trade and habitat loss.

Overhunting of the Malayan tiger’s food supply has also been a significant contributor to the dying off of the breed.

The species is listed as critically endangered by the International Union of Conservation for Nature (IUCN). Additionally, the World Wildlife Fund (WWF) estimates that there are now only 150 Malayan tigers left in the wild, compared to a peak of 3,000 during the 1950s.

While captivity breeding programs like the one in Arkansas have been making progress, there are still only 52 Malayan tigers living in zoos accredited by the Association of Zoos and Aquariums (AZA).

Big cat conservation efforts have ramped up in recent years, particularly in the United States, where a push to outlaw the private ownership of big cats has been seen.

Last month, the U.S. House of Representatives passed the Big Cat Public Safety Act, which would restrict the breeding and ownership of big cats to zoos and wildlife sanctuaries.

The bill, which passed in the House by a 278-124 margin, now goes to the Senate for debate. President Joe Biden has indicated that he would sign the bill into law if it were to pass.

Hurricane Ian: More than 2.4M without power in Florida

Hurricane Ian: More than 2.4M without power in Florida