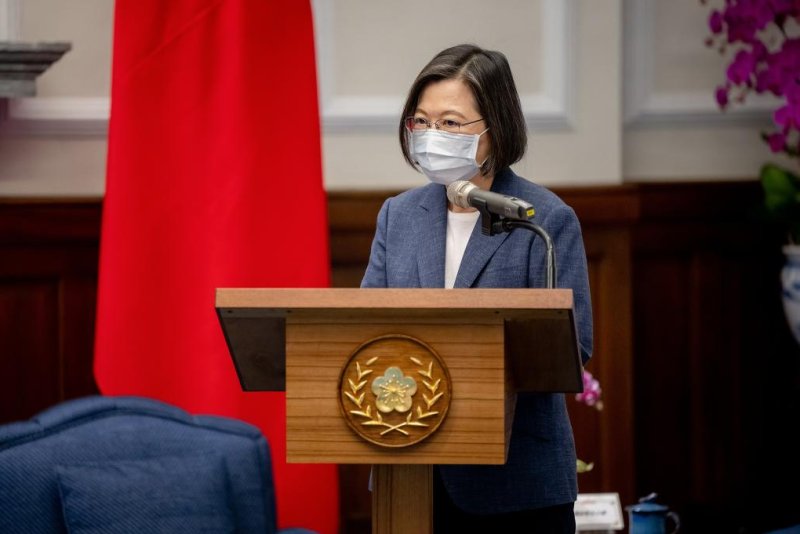 Taiwanese President Tsai Ing-wen said Tuesday that the democratic island has the “resolve” to stand up to threats from China. Photo by Makoto Lin/Taiwan Presidential Office/Flickr

Aug. 23 (UPI) — Taiwan will defend itself against authoritarian threats from China as it did during an attack more than six decades ago, President Tsai Ing-wen told a visiting delegation of former U.S. officials Tuesday.

Tuesday marked the 64th anniversary of the start of Taiwan’s last large-scale military confrontation with mainland China, sometimes referred to as the Second Taiwan Strait Crisis.

On Aug. 23, 1958, China began a heavy artillery bombardment of the Taiwan-controlled Kinmen and Matsu islands, which Taipei ultimately withstood with military assistance from the United States.

“That battle to protect our homeland showed the world that no threat of any kind could shake the Taiwanese people’s resolve to defend their nation,” Tsai said. “Not in the past, not now and not in the future.”

“We too will show the world that the people of Taiwan have both the resolve and the confidence to safeguard peace, security, freedom and prosperity for ourselves,” she said.

Beijing considers Taiwan a breakaway province and has vowed to retake the island, by force if necessary. Taipei, however, points out that it has never been controlled by China’s ruling Communist Party.

Tensions have been on the rise in the region since U.S. House Speaker Nancy Pelosi led a delegation to Taipei earlier this month, which Beijing followed with its largest-ever live-fire naval and air exercises near the island.

“The Chinese side firmly opposes official U.S. exchanges with the Taiwan region in any form and under any name,” a foreign ministry spokesman said on Monday in response to Holcomb’s visit.

Ellis told Tsai Tuesday that his delegation arrived with “deep concern about the escalating threats to peace and stability to the people of Taiwan and the Indo-Pacific region.”

The visit “reaffirms the ongoing commitment of the American people to deepening cooperation between the United States and Taiwan,” Ellis said.

“Part of this cooperation involves strengthening Taiwan’s capabilities for self-defense as well as the ability of the United States to deter and resist any resort to force across the Taiwan Strait,” he added.

Washington recognizes Beijing’s position that there is only one Chinese government and does not have diplomatic relations with Taipei.

The United States does not endorse China’s claim to Taiwan, however, and sells weapons to Taipei under a 1979 law that stipulates threats to the island are “of grave concern to the United States.”

The democratic island of 23 million has become perhaps the main point of contention in the relationship between Beijing and Washington, as concern about China’s intentions grows in the wake of Russia’s invasion of Ukraine.

The Russian invasion has “highlighted the continuing expansion of authoritarianism,” Tsai said.

“As Taiwan stands on the front line of authoritarian expansionism we continue to bolster our defense autonomy, and we will also continue to work with the United States on this front,” she said.