Crist, a current U.S. representative and former Florida governor, won the state’s Democratic primary with 59.8% of the vote, besting state Agriculture Commissioner Nikki Fried, who garnered 35.25% of the vote.

Fried, the only Democrat currently in a state-elected position, was also vying to be Florida’s first female governor.

“Nobody ever broke a glass ceiling on the first pitch,” Fried said in a speech after saying she had called Crist to congratulate him on the win.

“We are not going to back down until we restore democracy here in Florida and reverse 28 years of one party control in this state,” she added.

DeSantis ran unopposed — but some expect that he’s eyeing a potential run for president in 2024.

In a Senate race, Democratic Rep. Val Demings won the nomination to advance to November and face off with incumbent Republican Sen. Marco Rubio.

“I dream of an America where we protect constitutional rights like a woman’s right to choose. I’ve said it along this campaign trail, let me say it again. We’re not going back. We’re not,” Demings said Tuesday night. 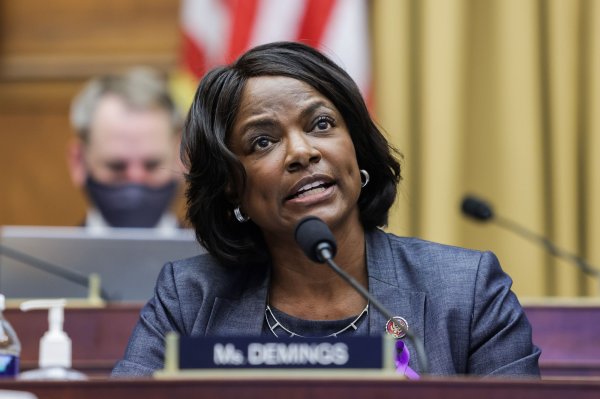 Some of the races are being decided under newly redrawn legislative maps that could tilt the congressional balance and potentially push two longtime Democrats out of Congress.

Mills won the contest with nearly 38% of the vote over Sabatini’s 23.6%

“Tonight, the Swamp won,” Sabatini said in a statement conceding defeat. “Yet — I will never stop fighting for the American First movement.”

“This is just the beginning — stay tuned.”

In Florida’s 13th District, which was a Democratic stronghold before redistricting, Republicans chose Anna Paulina Luna, an Air Force veteran endorsed by Trump, to face Democrat Eric Lynn in November.

She downed former prosecutor and self-described “Trump Republican” Kevin Hayslett by more than 10 percentage points. Luna had nearly 45% of the vote share to Hayslett’s 33.6%.

In a statement, Hayslett thanked his family and supporters for their commitment to his campaign.

“It was an honor to run in this race and have your trust, he said, calling on the Republican Party to “come together” to best Lynn in November.

In New York, redistricting is also proving to be consequential in races to be decided on Tuesday. Newly redrawn maps pit two longtime House Democrats in Reps. Carolyn Maloney and Jerrold Nadler against each other in the blue-leaning 12th District.

Maloney and Nadler have been in the House for 30 years and both have been prominent members of their party who have sought to hold Trump accountable for inciting the Jan. 6 attack at the U.S. Capitol. Maloney heads the House oversight committee.

However, Nadler ran away with the contest, securing more than 55% of the ballots with Maloney taking 24%.

In a statement published on Twitter shortly before 11 p.m., the veteran Democratic said she had called Nadler to congratulate him.

“I share his progressive values. I wish him every success,” she said.

Maloney had pitched herself as a champion of women’s rights after the U.S. Supreme Court decision in June that overturned the landmark abortion ruling in Roe vs. Wade. Nadler touted his leadership during Trump’s impeachment trials and his general opposition to Republican priorities.

Maloney had raised more money than her challengers, while Nadler received the loudest endorsement from Senate Democratic leader Chuck Schumer.

Both veteran Democrats were challenged in Tuesday’s primary by Suraj Patel, a New York Democrat and former aide to President Barack Obama who nearly beat Maloney in a challenge in 2020.

Patel secured 19% of the ballots.

The House seat in New York’s newly-redrawn 10th District is also on the ballot Tuesday for the first time in nearly a decade. There are nearly a dozen candidates seeking the seat.

Goldman, who helped lead Trump’s first impeachment trial in 2019, is believed to be the favorite in a field that includes New York City Councilwoman Carlina Rivera, Niou and freshman Rep. Mondaire Jones of the 17th District, who received endorsements from the Congressional Progressive Caucus and House Speaker Nancy Pelosi.

Goldman, however, has faced criticism for using his family fortune to outspend his opponents.

In New York’s 23rd District, a special election is being held to fill the remaining term of former Rep. Tom Reed, who resigned in May amid allegations of sexual misconduct.

Election results show Sempolinkis had nearly 53% of the vote to Dell Pia’s 46%.

He can only serve out the term through January.

Special elections are also being held Tuesday in New York’s 19th District, where mostly county races will be decided.

Although technically not a primary, Oklahoma is also in the mix on Tuesday — where voters will choose a replacement for retiring Republican Sen. Jim Inhofe.

In the state’s primary in June, Mullin fell short of 50% of the vote and forced a runoff against T.W. Shannon, a former state House speaker.

On Tuesday, voters backed Mullin with more than 65% of the vote, leaving Shannon with less than 35%.