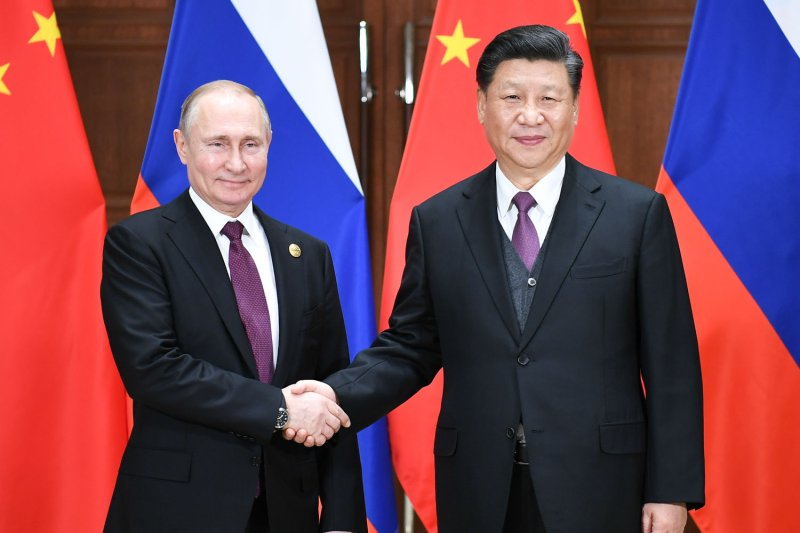 Russian President Vladimir Putin shakes hands with Chinese President Xi Jinping during a forum held in Beijing in April 2019. The
Russian Defense Ministry announced Monday that it will conduct military drills with
forces from China and several former members of the Soviet Union. File Photo by Xie Huanchi/UPI | License Photo

Aug. 29 (UPI) — The Russian Defense Ministry announced Monday that it will conduct military drills with forces from China and several former members of the Soviet Union amid tensions with the West over the war in Ukraine.

Russian officials announced the war games in a post to Telegram and said that the Vostok 2022 exercises will be held from Sept. 1-7 in seven locations in the country’s Eastern Military District, as well as the Sea of Okhotsk and the Sea of Japan.

The drills will take place at the same time the Royal Australian Air Force is hosting Exercise Pitch Black, a large-scale training engagement with 16 other nations including the United States, Britain and France.

“Vostok 2022 strategic command post exercise provides for various options for inter-service and coalition groupings of troops to ensure the military security of the Russian Federation and its allies,” the statement reads.

The Russian Defense Ministry said that the objectives of the drills are to check the level of preparedness and improve the skills of commanders in coalition groups “when repelling aggression in the eastern direction and in the far eastern maritime zone.”

Russia said that more than 50,000 soldiers and more than 5,000 pieces of weapons and military equipment will participate in the exercises. That equipment will include 140 aircraft, 60 warships, boats and support vessels.

In Australia, Exercise Pitch Black — which is ongoing through Sept. 8 — will include more than 100 aircraft and 2,500 personnel.

Russia said its Airborne units, long-range bombers and military transport planes will be taking part in the drills while ships in its Pacific Fleet and China’s naval forces drill in assisting land troops in the Sea of Japan.

China’s Defense Ministry confirmed in a press release that it would be participating in the exercises but said that its participation “is unrelated to the current international and regional situation.”

Defense ties between Russia and China have grown stronger since Russian troops invaded Ukraine on Feb. 24 as China has blamed the United States and NATO for provoking Moscow into invading Ukraine.

Russia has supported China amid tensions with the United States after House Speaker Nancy Pelosi‘s visit to Taiwan earlier this month.