IAEA Director-General Rafael Mariano Grossi holds a news conference about its mission to Zaporizhzhya upon his return from Ukraine, in Vienna, Austria, on Friday. Photo by Max Brucker/EPA-EFE

Sept. 3 (UPI) — The head of the United Nations’ nuclear watchdog said the agency plans to release a report on the damaged damaged plant in Zaporizhzhia, Ukraine, next week. In the meantime, two inspectors will remain at the site to continually monitor safety.

Rafael Mariano Grossi, director-general of the International Atomic Energy Agency said his team wasn’t surprised by anything they found at the nuclear power plant, which has been under Russian control since early March. Still, fighting between Ukrainian and Russian forces has continually threatened the safety of the site.

“My concern would be the physical integrity — would be the power supply and of course the staff,” Grossi told reporters Friday after his team arrived at the airport in Vienna, Austria.

Of the 14 IAEA experts who traveled to the Zaporizhzhia plant Thursday for the inspections, six remained, two of whom will stay at the site until fighting has ended.

“If something happens or if any limitation comes, they are going to be reporting it … to us,” Grossi said. “It is no longer a matter of ‘A said this and B said the contrary.’ Now the IAEA is there.”

Both Ukrainian and Russian officials have accused each other of launching attacks dangerously close to the facility.

Fighting on Thursday led the plant’s operator to shut down one of the facility’s two working nuclear reactors, as a precaution. Built in the 1980s, the Zaporizhzhia plant has six light water nuclear reactors, but only two have been operating since the war began in February. Fighting in close proximity to the plant cut the plant off from the main power grid last week, presenting a serious danger. Workers were able to reconnect to the grid and avoid potential catastrophe.

The plant is located in southeastern Ukraine on the banks of the Dnipro River and has been under Russian control for months. The entire area, in fact, is held by Russian forces.

Meanwhile, Russia’s state-run energy company, Gazprom, announced that Siemens Energy is prepared to help it repair the Nord Stream 1 gas pipeline, The Guardian reported. Gazprom, though, said there was nowhere available for Siemens to complete the work.

Gazprom shut down the pipeline flows to European partners indefinitely this week citing an oil leak at its Portovaya compressor station. Russia has provided no timeline for the reopening of the pipeline.

Clyde Hughes contributed to this report. 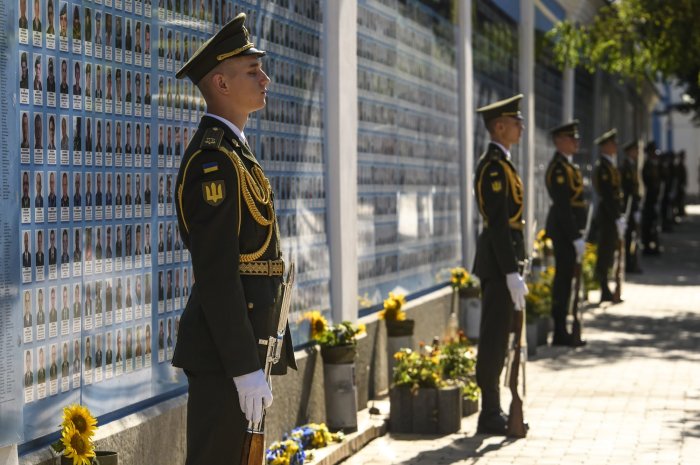 A Ukrainian servicemen stands guard by the wall of memory to the fallen Ukrainian soldiers in Kyiv, Ukraine on Wednesday, August 24, 2022. This year, Ukraine’s Independence Day, which commemorates their break with the Soviet Union in 1991, coincides with the six-month mark since Russia launched its large-scale invasion of the country. The fighting has largely focused on the eastern Donbas region and the south, but most anywhere in Ukraine remains vulnerable to Russian air strikes. Photo by Vladyslav Musiienko/UPI | License Photo