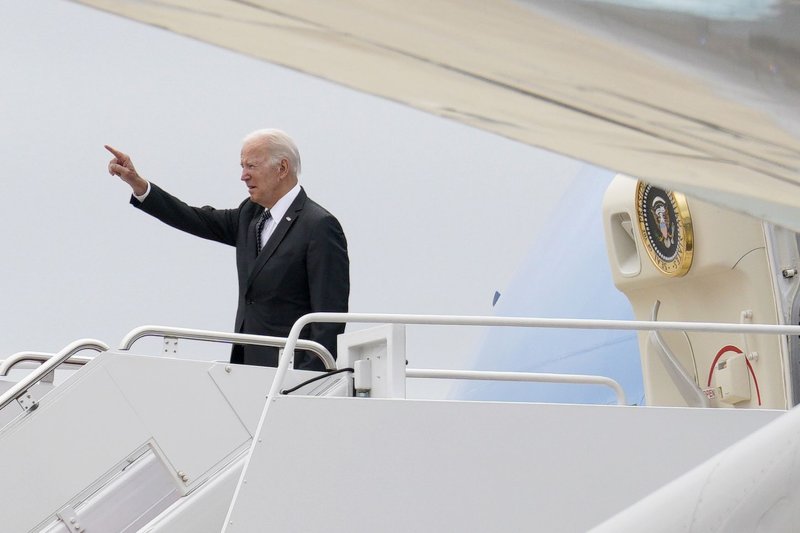 U.S. President Joe Biden boards Air Force One at Joint Base Andrews in Maryland as he departs Washington, D.C. for Boston, Mass. to give his “Cancer Moonshot” address on Monday. Photo by Yuri Gripas/UPI | License Photo

Sept. 12 (UPI) — President Joe Biden called on America to “end cancer as we know it and to cure cancers once and for all” Monday on the 60th anniversary of one of former President John F. Kennedy’s most famous speeches.

Biden went to the John F. Kennedy Library in Massachusetts to address his “Cancer Moonshot” initiative, six decades after Kennedy gave his speech at Rice University proclaiming the United States would put astronauts on the moon by the end of the 1960s. The first men on the moon landed in July 1969, meeting Kennedy’s deadline with five months to spare.

“I believe we can usher in the same unwillingness to postpone, the same national purpose that will serve to organize and measure the best of our energies and skills to end cancer as we know it and to cure cancers once and for all,” Biden told the packed library.

“On this day in 1962, America was facing an inflection point,” Biden said. “When President Kennedy announced Moonshot, we didn’t have all the tools we needed. With our ‘Cancer Moonshot,’ today we do.”

In his speech, Biden defined America as full of “possibilities.”

Biden said that Kennedy succeeded in establishing “a national purpose that could rally the American people around a common cause” in his speech.

“Now is our time,” Biden said.

“Cancer does not discriminate red and blue. It doesn’t care if you’re a Republican or Democrat. Beating cancer is something we can do together.”

Biden called his “Cancer Moonshot” initiative “one of the reasons why I ran for president.”

“When I was elected president, I was determined to supercharge ‘Cancer Moonshot’ as a central effort in the Biden-Harris administration,” he said. “To create a cancer research and care system that most people think we already have, but don’t realize until they already have cancer that we don’t.”

“The progress over the last 25 years, the death rate from cancer has fallen more than 25%. But despite the progress of lives extended, lives saved, cancer is still the number two cause of death in America, second only to heart disease,” Biden said as he laid out his goals.

“The goal is to cut cancer death rates by at least 50%, at least 50% in the next 25 years,” he said. “To turn more cancers from death sentences into chronic diseases people can live with. And to create more supportive experiences for patients and families.”

Biden called for federally funded research to be transparent and available for free. He also called for a “Cancer Moonshot” scholar program to support future scientists.

Biden’s plan also establishes the White House Cancer Cabinet, an initiative involving multiple departments across the federal government, and calls for improved and earlier cancer screenings and detection, as well as prevention and at-home screenings.

“It is a vision that will change people’s lives for the better, improve their health and decrease the burden of the disease,” the White House said in a statement on Monday.

Biden first laid the seeds of the Cancer Moonshot initiative in 2016 when he was vice president under Barack Obama, and not long after his son, Beau, died of brain cancer. It’s a loss that still deeply affects Biden.

“We’re calling it a ‘Moonshot,’ and that’s because I believe that this effort, like President [John] Kennedy’s call to land on the moon … is truly a call to humankind — to be bold and do big things,” Biden previously said of the project.

Biden arrived in Boston just before noon Monday, the White House said. He first made remarks at the airport and then visited the John F. Kennedy Library and Museum shortly after 4 p.m. EDT to push his “Cancer Moonshot” initiative.

“Because that goal will serve to organize and measure the best of our energies and skills. Because that challenge is one that we are willing to accept, one we are unwilling to postpone, and one we intend to win.”

President John F. Kennedy speaks at Rice University in Houston, Texas, on September 12, 1962. The speech is best remembered for Kennedy’s promise to send astronauts to the moon, “not because [it] is easy, but because [it] is hard.” File Photo by NASA

Before returning to the White House, Biden attended a Democratic Party reception in Boston.

Also on Monday, Biden signed an executive order to launch a national biotechnology and biomanufacturing initiative.

The White House said the initiative will drive federal investments to spur new biotechnology leadership and economic competitiveness in the fields.

“This initiative will make the United States more prosperous and our planet more secure,” the White House said in a statement.

The White House will host a summit Wednesday for Biden’s bioeconomy and biomanufacturing plan.