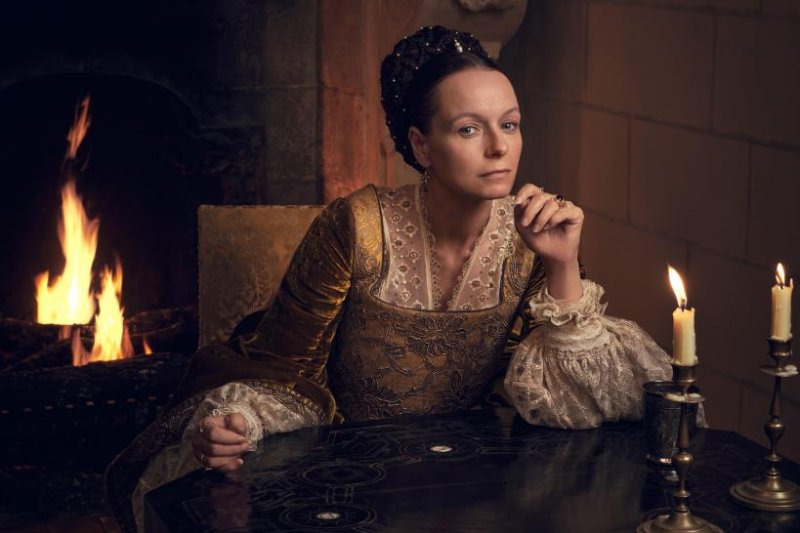 Samantha Morton can now be seen in the costume drama, “The Serpent Queen.” Photo courtesy of Starz

NEW YORK, Sept. 16 (UPI) — Samantha Morton says she was able to relate to Catherine de Medici, the 16th century monarch she plays in The Serpent Queen, because they both are survivors who transcended their hard-scrabble circumstances and achieved great success.

“I come from a very, very working-class background. My family spent time in homeless hostels. My parents worked in factories when they could work. I left school when I was 12. I was shunted from pillar to post. I was in the care system,” Morton told reporters during a recent Zoom interview.

“Interestingly, you have Catherine, who was an orphan shoved from pillar to post, told she wasn’t worth anything because she was Italian. When she arrived in France, she was kind of owned by other people,” she said.

“I’m not the queen of anywhere, but I’ve achieved a huge amount based on my adverse childhood. So, there were certainly elements of that I could tap into.”

Based on the Leonie Frieda book, Catherine de Medici: Renaissance Queen of France, the Starz drama tells the tale of an Italian woman of noble blood, but with no money or family, who becomes queen of France with the help of the ambitious Pope Clement VII (Charles Dance). It co-stars Liv Hill and Colm Meaney. New episodes air Sundays.

“There are a lot of twists and turns in the show. For those of you who don’t know her life, it’s really extraordinary. You can’t believe it’s real,” Morton said.

“Every aspect of Catherine was exciting and very interesting and a joy to play,” she added. “I feel very privileged to go from playing someone who I love, like Alpha in The Walking Dead, and then to play the queen of France in the same year is a joy. It’s like really flexing those [acting] muscles.”

Morton said the show provides lessons for real-life people fighting for rights and opportunities in 2022.

“Don’t give up. We can’t give up, but, also, you have to work within the system to beat the system. Sometimes you have to know the game to play the game, to then beat them at their own game,” the actress said.

For example, she said, Catherine spent her time as an orphan in a Catholic convent learning foreign languages and sharpening her math skills.

“She was an astronomer and an astrologer and she designed gardens. She was a master of everything, so whenever she came to anything in her life, she was better than the people who were teaching her,” Morton said.

“For those of us who are parents or have siblings or have relationships with younger people, [tell them to] try and educate yourself, whatever gender you are. You will help yourself and be able to have a fair pop at it.”

The Serpent Queen is told from Catherine’s point of view, and Morton insists she is a reliable narrator.

“She is trustworthy. She is telling this as if she were telling it to a grandchild,” the actress said. “It’s more about the question she asks, ‘What would you have done differently, if you were in these situations?'”

She added: “She seems to be sharing facts. She’s not being manipulative with those facts. She’s telling it how it is and her reason for doing certain things.

“But that’s open to interpretation, isn’t it? Two people can be in the same room and witness a crime, and I guarantee if they are interviewed by police officers, those two people might have different versions of events even though they saw the same thing.”

Morton is no stranger to biographical dramas. She played Myra Hindley in Longford and Deborah Curtis in Control, but these were fairly modern women compared to Catherine, and there was visual and audio source material she was able to study to prepare for depicting them.

“Whenever I’ve played real people before in films or television, I had videotape of them or recordings of their voice. For this, all I had was her handwriting,” Morton said.

The Jane Eyre, Emma, Harlots and Walking Dead star said she tries to build her characters from the inside out, honing in on their emotions, experiences and psyche.

But the costumes, hair and makeup were essential building blocks, too.

“Alpha almost has a uniform like she is a soldier [on Walking Dead]. Once she’s got the gear on, then she is in work mode,” Morton said.

“The same has to be said for Catherine. Once she gets that black dress on, she means business. It’s not the vulnerable Catherine. It’s not Catherine behind closed doors. It’s the poker-faced Catherine. ‘Bring it on. We’re going to play this game now.’ The clothing helps enormously.”

The actress said she loves the fact that she is still getting the chance to play complicated, fascinating characters more than 30 years into her acting career.

“Like a good wine or a good cheese, we get better with age, sometimes. We learn our craft, whether you are a chef or a gardener or a musician. We get better and better, if we are given that opportunity.”

“So often in TV and films, women were written off at a certain age because they weren’t desirable or the story wasn’t really about you. I think it’s amazing that I’m getting to do this and that I am working regularly.”