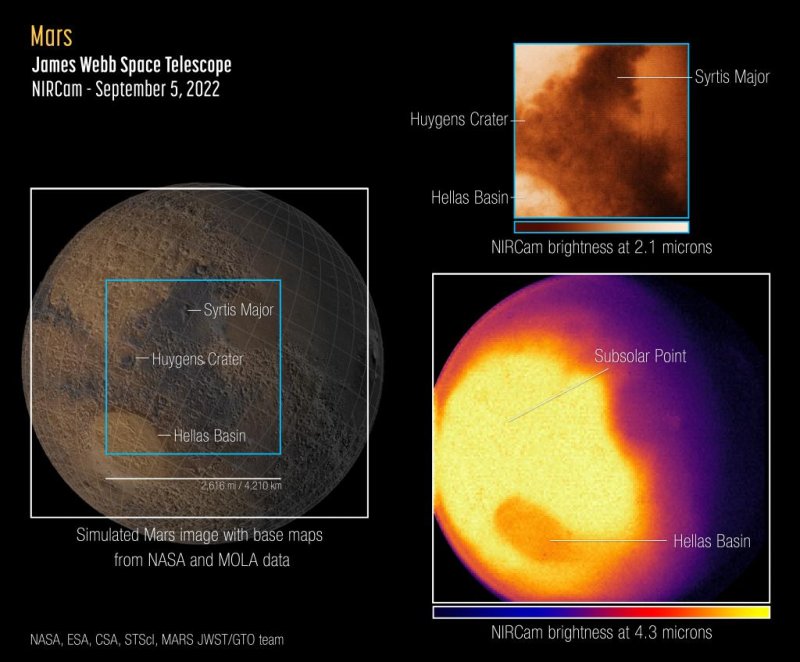 The images show the eastern hemisphere of Mars in different wavelengths of infrared light. NASA said that the new images will help advance scientific study of the red planet.

“Webb can capture images and spectra with the spectral resolution needed to study short-term phenomena like dust storms, weather patterns, seasonal changes, and, in a single observation, processes that occur at different times (daytime, sunset, and nighttime) of a Martian day,” the agency said in a blog post.

In fact, the telescope was so sensitive that astronomers had to make adjustments to prevent the blinding light from saturating the telescope’s detectors.

Some of the images show the rings of the Huygens Crater, the dark volcanic rock of Syrtis Major and brightening in the Hellas Basin.

“The Hellas Basin is a lower altitude, and thus experiences higher air pressure. That higher pressure leads to a suppression of the thermal emission at this particular wavelength range [4.1-4.4 microns] due to an effect called pressure broadening,” Geronimo Villanueva, the principal investigator of NASA’s Goddard Space Flight Center, said. “It will be very interesting to tease apart these competing effects in these data.”

The researchers are preparing a paper they will submit to a scientific journal for peer review and publication.

The edge of a nearby, young, star-forming region, NGC 3324 in the Carina Nebula. Captured in infrared light by the Near-Infrared Camera (NIRCam) on NASA’s James Webb Space Telescope, this image, released on July 12, 2022, reveals previously obscured areas of star birth. Photo courtesy of NASA | License Photo

Russian oligarch one of three charged for evading sanctions